Three years ago, the new Hanuman Mandir opened at the Neem Karoli Ashram in Taos. This formal Hindu Temple built with adobe, fully integrating the southwest feelings of New Mexico, has an annual event called Guru Purnima which honors the relationship between Neem Karoli Baba and his followers.

Ram Dass was able to make it back to Taos, leaving Maui for the first time in a long while to be at the opening of the Temple in 2019. It was a dream come true. In his first Hanuman Foundation Newsletter in 1974 he spoke about this Temple becoming a reality. 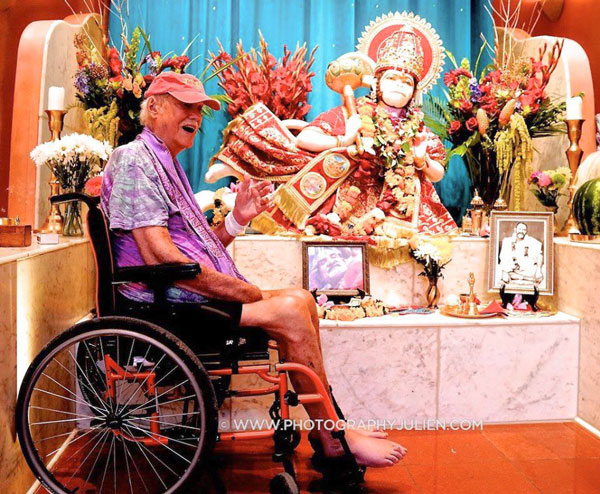 Five months later, Ram Dass passed at his home in Maui. Ram Dass’ ashes were saved for this event. Ram Dass had been president of the Hanuman Temple and Neem Karoli Baba Ashram for many years. The Board wanted to plant a tree for Ram Dass and inter some of his ashes on the property, but Covid in 2020 and 2021 made Dassima’s travel from Hawaii next to impossible. Many others from around the country who might want to be there had the same problem.

Covid protections were still in place with a rule that everyone indoors had to wear a mask. The Guru Purnima celebration began inside the Hanuman Temple at 1:08pm on July 12, with 24 hours of continuous Mahamantra chanting  People were free to come and go and stay with the chanting as long as they liked. We learned the schedule of a big Bhandara Meal after the chanting. There were to be a couple Ram Dass movies that evening. Thursday was the day of the Ram Dass Memorial. For the meal, 370 people attended. Delicious vegetarian Indian food cooked with love was provided to all.

Since the last major gathering at the Temple a few years ago, a small group of long-time devotees of Maharaj-ji have left their bodies. Ram Dass and then his dear friend and Guru Brother KK Sah passed in 2019. Lakshmi Ma, Ram Rani, Shruti Ram, Marlene and Joanne also known as Ganga and Yamuna have left their bodies recently as well. So, a Memorial Orchard with trees planted in theirs and future Satsang member’s honor has been created. Ram Dass requested the biggest
tree! So, Ram Dass will have a full-size pear tree, and dwarf fruit trees were planted for the others. Muid, one of Ram Dass’ caregivers, led chanting at the beginning of the second service. Preceding the planting of the trees, two memorial services were hosted by Mirabai Starr. Stirring, funny, and heartfelt stories were shared about the Satsang members in the morning. In the afternoon a second service was held for Ram Dass and KK. You can see the 2 hour video of the service at this link. 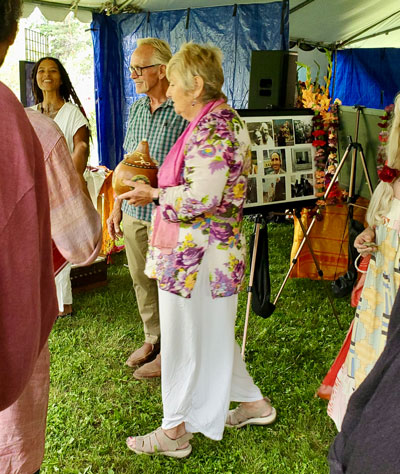 Personally, it was a time to remember Ram Dass and the loving awareness that he easily shared with so many people. Gathering with many friends from different stages of my life was very warm and meaningful. The chanting with other people of the Hanuman Chalisa and Mahamantra is always special in  there. And outside the chanting hall people were gathered and sharing together. Some attending the program only came to Ram Dass’ love since he left his body. This was my third Memorial Service for Ram Dass, two right at the beginning of Covid. And now a completion with the third and the one Ram Dass helped plan.